MT. PLEASANT, S.C. – Sophomore Valerie Cassell threw her first career no-hitter to embark the Cougars towards a convincing doubleheader sweep of South Carolina State at Patriots Point on Tuesday afternoon. CofC (7-7 overall) outhit the Bulldogs, 28-2, en route to 10-0 and 12-0 run-rule induced victories. Cassell (Edison, N.J.) denied the Bulldogs a base runner until a last-inning fielding error took the perfect game off the board, but she still faced the absolute minimum-15 hitters by initiating a game-ending 1-6-3 double play to finalize her finest career outing to date. She struck out seven of the 15 batters she faced, including the first five hitters to step into the box, and required just seven outs of her defense (four excluding the three assists she made herself) as she threw just 48 pitches and 62 strikes (77%). 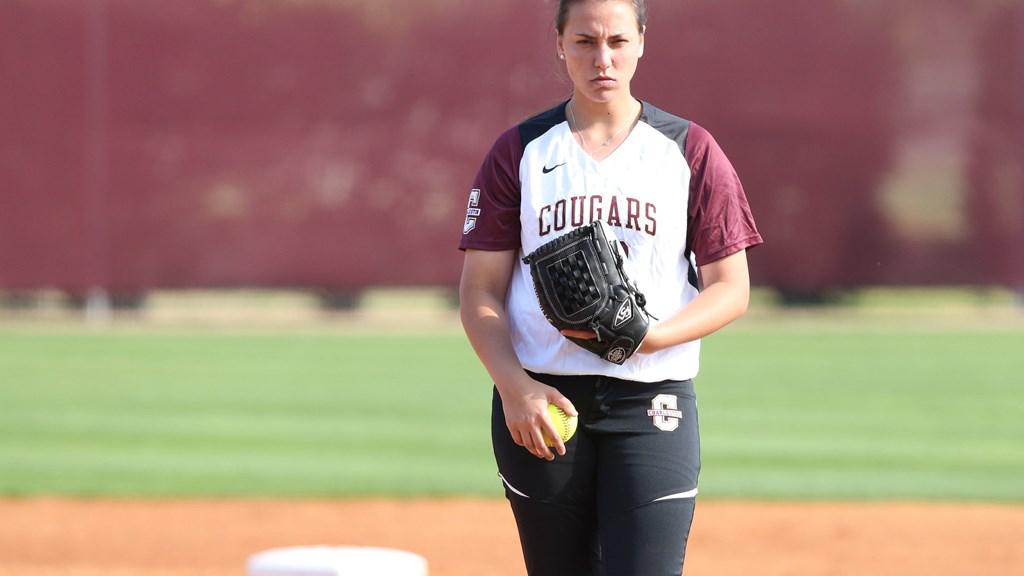 Cassell (Edison, N.J.) denied the Bulldogs a base runner until a last-inning fielding error took the perfect game off the board, but she still faced the absolute minimum-15 hitters by initiating a game-ending 1-6-3 double play to finalize her finest career outing to date.

She struck out seven of the 15 batters she faced, including the first five hitters to step into the box, and required just seven outs of her defense (four excluding the three assists she made herself) as she threw just 48 pitches and 62 strikes (77%).

In game two, Hope Klicker (Walla Walla, Wash.) and Jen Rosene (Charlotte, N.C.) combined to strike out four hitters in the five innings of shutout softball that they dealt. Each only allowed one hit as Klicker pitched 3.0 innings to earn the win and Rosene mowed through the SC State lineup for the remaining two innings.

The offense did its part as well with 15 different Cougars combining for CofC's 28 hits and .560 (28-for-50) batting average on the day. With 11 hits going for extra bases, the Cougars slugged at .900 on the afternoon.

Carly Hansis (Little River, S.C.) went 4-for-5 on the day with five RBIs and the second homerun of her career, a three-run shot to left center in game two.

“It was nice to clear the bench and get a lot of kids some playing time,” said head coach Linda Kalafatis. “We've been working in practice on doing the things we did today, and there are still some things that we aren't doing well. This gave us an opportunity to recreate some things and identify the things we need to work on.

“The no-hitter for Cassell was great to see. I don't care who you're playing or where you are; a no-no is hard to get, and the offense helped her out by cutting it to five innings. It was great seeing Jen get out there and throw; we haven't seen her throw at all yet since she was out all fall.

“We just try to put the focus on us and work on the things we need to work on.”

COFC: 10, SC STATE: 0 (Box Score)
While Cassell was steadily working through the Bulldog lineup, the Cougars scored four runs in the first three innings before exploding for a six-run rally in the bottom of the fourth which induced the run rule in the ensuing half inning and made the no-hitter official.

The Cougars went to work right away with back-to-back singles by Carly Corthell (Reno, Nev.) and Mackenzie Maples (Corona, Calif.) putting runners on the corners, and Cassell delivering an RBI sacrifice fly to score the game's first run.

The Cougars stole a run in the second when Hansis reached second on a fielding error, tagged up towards third on a fly ball and scored whenRebecca Mueller (Fair Oaks, Calif.) slapped a groundball to the right side.

Lizzy Vaughn (Placerville, Calif.) ignited the third inning with a leadoff triple into the corner in right, and Corthell followed with a run-scoring single up the middle to make the score 3-0. Two batters later, Cassell singled down the right field line which plated Corthell to stretch the lead further.

The Cougars blew the game open in the fourth with a six-run, six-hit rally which subjected the game to the five-inning run rule. Hansis led off with a double to the wall in the left center, followed by a Kelsey Hodgson (Woodstock, Ga.) walk and Katie Padilla (Corona, Calif.) single. The next four hitters would go for extra bases in the form of a Vaughn double, Maples triple, Cassell double, and Brianna Davis (Simpsonville, S.C.) double as the Cougars batted around  in the inning.

The double by Davis was the first hit of the freshman's career and served as the fatal strike in the game-one win.

COFC: 12, SC STATE: 0 (Box Score)
The Cougars picked up where they left off in game two and exploded to 17 more hits by 11 different players as CofC coasted to another comprehensive victory.

The scoring started immediately with Vaughn leading off by drawing a walk before back-to-back RBI base hits by Hansis and Hodgson gave the Cougars an early 2-0 lead.

The Cougars continued the season's second-inning dominance with eight runs on nine hits and now outscore their opponents 20-3 in the second inning on the year.

Mueller would lead off the inning with a double to left center, and ultimately cap off the rally with a true in-the-park homerun after the Cougars batted around in the inning. After her leadoff double, Allison Pedigo (Scottsville, Ky.) drew a walk and Padilla sent an RBI single up the middle to bring Mueller around to score her first of two runs in the inning.

The Bulldogs then picked up two quick groundball outs, but the Cougars persisted in the inning with another seemingly-thematic two-out rally, as over half of CofC's runs have come with two outs this season.

With two outs and two on, Maples singled to left field followed by Hansis's three-run homerun to left center. Chandler Frisbie (Lawrenceville, Ga.) extended the rally with a bases-empty double to right center, and Mueller stepped back into the box to send a line drive past a diving center fielder and motored around the bases to make the score 10-0.

The Cougars added another run in the third with back-to-back-to-back singles by Katie O'Brien (Middletown, N.J.), Lexi Murdock (Clifton, S.C.), and Hansis, resulting in her fifth RBI of the game.

Freshmen Kayla Hall (Cornelius, N.C.) and Kelly Strittmatter (Wyckoff, N.J.) picked up their first collegiate hits to open the fourth, and O'Brien singled down the right field line to plate the Cougars' 12th and final run.